Using Brent as a global proxy benchmark, we find that the oil price continues to skate around $60 per barrel. That’s a far cry from $115 we saw last summer. So after two months into the not so New Year, and having received the latest financial data from many UK-listed oil and gas companies, it is worth revisiting or rather re-weighting their share target price.

Putting things into context, from a high of $113 per barrel recorded on 13 June, 2014 in the immediate aftermath of ISIS hitting Iraq, Brent closed just above $62 on 27 February. That represents a decline of 55% in the value of a Brent barrel. Over the corresponding period, many of the oil and gas companies listed on the London Stock Exchange’s main market and the Alternative investment Market (AiM), have shed on average 10% (or in many cases considerably more) of their headline share price valuation.

While I do not have the resources to monitor every single UK-listed oil and gas company, for illustrative weighting purposes, I have chosen the three blue chips (BP, BG Group and Royal Dutch Shell), along with six main market listings (Cairn Energy, Afren, Tethys Petroleum, Ophir, Genel Energy and Tullow Oil) and four AiM listings (Circle Oil, Wentworth Resources, Ithaca Energy and Trinity EP). Since June, the price decline is particularly pronounced in the case of some, while others have seen declines but continue to weather the oil price slump better than their peers.

However, there is no escaping bearish sentiment when your core business revolves around a depressed commodity entrapped by oversupply that is likely to last a while yet. Diversified companies are holding up but some are prospecting via projects which won’t be profitable even at $60 per barrel. In light of this, I have revised down my target prices for all of the aforementioned (see table below), except Genel Energy. All conclusions on target prices and revisions in the table are quoted in pound sterling (£1=$1.55, at the time of writing). 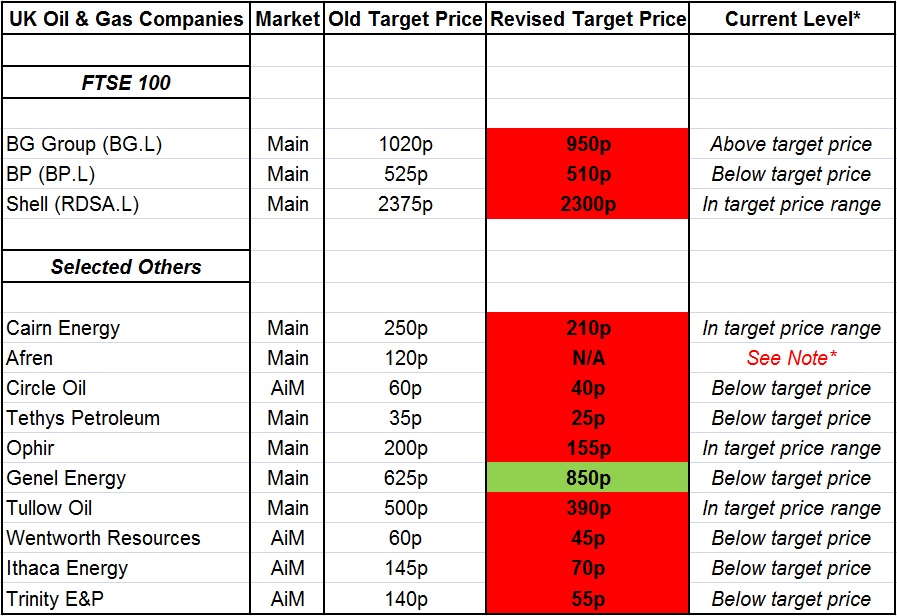 Starting with the three British oil and gas blue chips, portfolio diversification means they’ll weather the storm better than independent upstarts. While I have lost patience with BG Group, I would hold Royal Dutch Shell shares and buy BP shares. In case of Shell, you’ve got to love a company that has never failed in giving shareholders a dividend since 1945, while BP, despite its continuing legal woes and problems in Russia, seems to be turning a corner.

Lurking in the background is constant chatter about BP becoming a takeover target. While I think that’s just the kind of rubbish occasionally peddled by overexcited investment bankers, should a bid for BP surface – it’s not really going to harm your prospects as a shareholder.

Switching tack to six other main market companies, I’m not optimistic in holding on to Cairn Energy, Tullow Oil or Wentworth Resources. Going the other way, I am pretty optimistic about Circle Oil, Tethys Petroleum (whose finance chief I recently interviewed for Forbes) and Genel Energy (the only upward revision to my target prices as mentioned).