The Bosler House in Denver’s hip Highland neighborhood will be put up for sale with the hope of finding an owner who can restore the historic mansion, which has fallen into disrepair.

A court-appointed third party that has served as a caretaker for the landmark-designated house will seek a judge’s approval to list the house for sale this week.

“This is a difficult situation,” Brad Buchanan, executive director of Denver Community Planning and Development, said in a statement. “The sale of this house is a last resort and an unprecedented move — but a necessary one. Protecting our city’s most treasured historic assets is something we take very seriously, and something that Denver’s landmark preservation ordinance requires.” 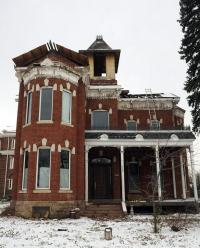 A historic assessment on the house — 3209 W. Fairview Place — released on Wednesday notes that the house could be restored to good condition with about $1.75 million in repairs. The building has had an open roof, exposing the interior to water and the elements since 2008 when Painter was ordered to stop construction on the roof since he didn’t have a permit required by the Landmark Preservation Commission. Painter received a fine of $999 per day starting in May 2013 until the house reached 110 percent of its value.

The city has claims against Painter to foreclose on the house and collect on liens. Negotiations are ongoing.

Painter’s lawyer declined to comment due to the pending status of the foreclosure.

The historic assessment states the house is in “fair to poor condition” and recommends restoration in five phases, starting with replacing the roof. The assessment was paid for by a grant from History Colorado.

Denver Community Planning and Development spokeswoman Andrea Burns said selling the building would be better than a foreclosure, which would put the house up for auction.

Burns added that the money from the sale would likely be split between Painter and the city after the receiver’s costs and fees are paid. The city’s portion of the funds would go toward the liens.

The Bosler House was built in 1875 by Ambrose Bosler and was bought by Painter in 1987. It was designated a Denver historic landmark in 1984 because of its architecture and it is one of the few remaining houses that predate Colorado’s statehood.