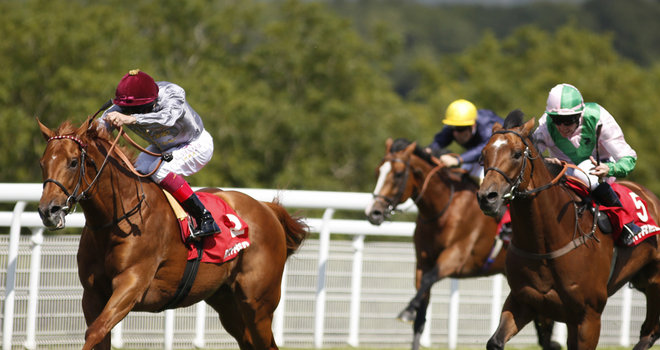 Jassim Al Ghazali’s charge is the star performer in his homeland, notably landing a repeat success in the Emir’s Trophy at Doha earlier in the year, and he arrived on the Sussex Downs having filled the runner-up spot in Listed events at Newbury and Newmarket.

Dettori rode a patient race aboard the 11/2 chance for much of the mile-and-a-half contest before switching wide to mount his challenge halfway up the home straight.

That move proved crucial as hot favourite The Corsican looked to be cantering on the far side of the track, only to find the gap closing in front of him and he ended up caught in a pocket.

Once in the clear, The Corsican began to motor home, but Dubday was already away and gone and passed the post three-quarters of a length ahead of the unfortunate runner-up.

Dettori said: “It’s the first winner for Qatar (trainers) in the UK.

“I take my hat off to Jassim, he’s done a fantastic job with him.

“In fairness, he picked up really well – he just idled a bit in front.

“It’s a big achievement to take this horse from Qatar to here and win.”

Al Ghazali, who plans to send up to 30 horses to be campaigned in Britain next season and is the dominant force with thoroughbreds in Qatar, said: “I’m very happy – it’s a big, big win for me.”

Harry Herbert, racing manager for Dubday’s owners, Al Shaqab Racing, said: “We needed to see where he fitted in with the Europeans.

“All credit to Jassim and his team, I’m thrilled the horse has proved himself.

“There were Group One horses in there and he handled the track, which I was a bit worried about as a fast, downhill finish is completely different to Doha.

“They love him out there because he comes with a late flourish and Frankie loves him, too.

“I’m quite embarrassed that we never thought beyond this, so we’ll have to sit on the fence.”

Al Ghazali added: “This is a special moment, to have my country’s name winning here.

“It’s not easy to win races in this country, so I’m very happy with the horse.

“He’s the champion horse in Qatar and we desperately wanted to bring him to the UK, but we knew it wouldn’t be easy.

“He run two other nice races since he’s been here, but to win with him at the meeting sponsored by Qatar is beyond our dreams.”

David Simcock was left to rue what might have been with The Corsican.

The Newmarket handler said: “That sort of thing happens here.

“He’s run really well. He got the trip, but the other horse pulled out more when we got to his quarters.”

Richard Hannon said of third-placed Windshear: “He’s run a super race and he’s back to his best.

“He’s in the Ebor and we’ll have a look at that, but I’m not sure lots of runners suit him.”