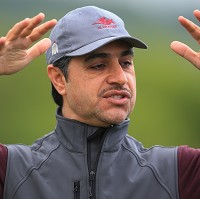 Jassim Al Ghazali’s charge is the star performer in his homeland, notably landing a repeat success in the Emir’s Trophy at Doha earlier in the year, and he arrived on the Sussex Downs having filled the runner-up spot in Listed events at Newbury and Newmarket.

Dettori rode a patient race aboard the 11-2 chance for much of the mile-and-a-half contest before switching wide to mount his challenge halfway up the home straight.That move proved crucial as hot favourite The Corsican looked to be cantering on the far side of the track, only to find the gap closing in front of him and he ended up caught in a pocket.

Once in the clear, The Corsican began to motor home, but Dubday was already away and gone and passed the post three-quarters of a length ahead of the unfortunate runner-up.

Dettori said: “It’s the first winner for Qatar (trainers) in the UK.I take my hat off to Jassim, he’s done a fantastic job with him.

“In fairness, he picked up really well – he just idled a bit in front.It’s a big achievement to take this horse from Qatar to here and win.”

Al Ghazali, who plans to send up to 30 horses to be campaigned in Britain next season and is the dominant force with thoroughbreds in Qatar, said: “I’m very happy – it’s a big, big win for me.”