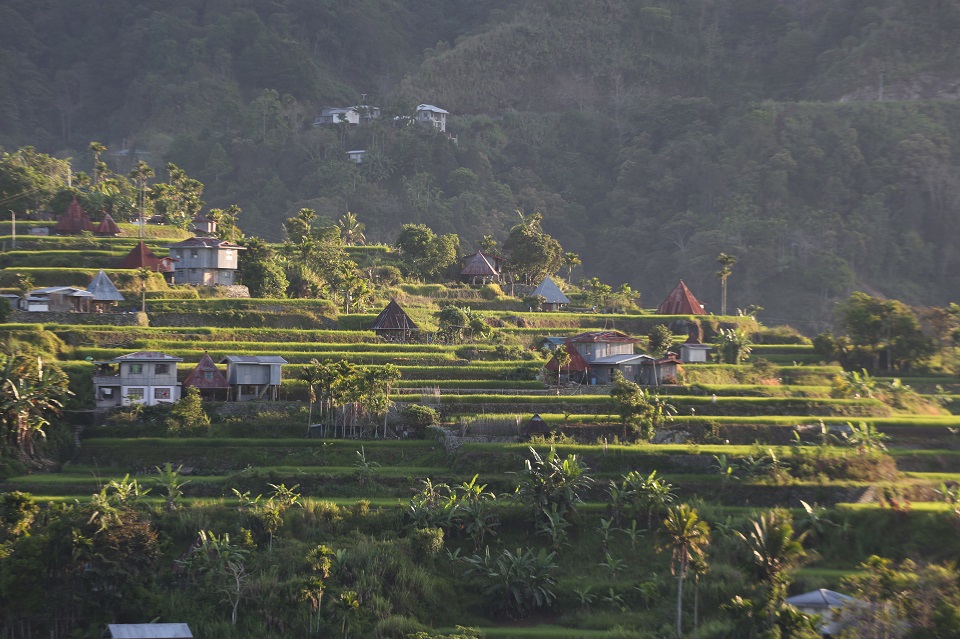 MAYOYAO, Ifugao – It is fiesta time in the famed rice terraces of the northern Philippines, and young men in colorful tribal clothing pound ancient rhythms on brass gongs as wild boars squeal ahead of slaughter.

The annual festivals, held in remote mountain communities after the planting of the rice that is at the core of their existence, are a vital way of passing centuries-old customs to the new generation.

Those traditions are the soul of the Cordillera ranges, one of the Philippines’ most spectacular regions where Ifugao tribespeople are custodians of World Heritage-listed rice terraces.

But the stepped paddy fields, built 2,000 years ago and the highest in Asia, as well as the Ifugao’s traditional lifestyles, are facing unprecedented threats amid the relentless forces of modernity.

“There is a danger of these beautiful areas turning into urban jungles,” Edison Molanida, World Heritage sites manager for the national government’s culture commission, told AFP.

“One of the main threats is the rapid pace of development in the area. And by rapid pace, we mean unmanaged development.”

On misty mornings, when the first rays of pale orange sunshine fall across the stone walls that follow the mountains’ contours, the terraces look like giant staircases climbing to the heavens.

UNESCO also praises the Ifugao people for having remained in harmony with nature for so long, such as by using herbs instead of pesticides, eschewing fertilisers and generally showing great care for limited natural resources.

The irrigation system, which taps water from mountaintop forests and shares it equitably throughout the communities, is hailed as a “mastery of engineering”.

A generation or two ago, many of the Ifugao villages and the lifestyles of the people who lived in them largely resembled those of centuries ago.

Large areas of the five listed districts, home to roughly 100,000 people and a day’s drive from the capital Manila, today retain many of the aspects celebrated by UNESCO.

But radical change is underway.

Once picturesque villages are acquiring the chaotic trappings of typical poor towns in the Philippines, including ugly multi-storey buildings made of cheap concrete, polluting diesel vehicles and ramshackle tin-roofed shanties.

Introduced pests, including giant Indonesian earthworms, are causing major damage to the structures of the terraces, causing some to collapse.

In Mayoyao, one of the region’s most scenic villages, local officials say the worms, as well as snails originally brought in as a food for protein, are the biggest dangers to the terraces.

Television and the Internet are similarly eroding traditional work ethics, which are vital to maintaining the labour-intensive terraces.

“When our parents told us to go and work, we’d obey,” Margaret Licnachan, 38, a rice farmer and a mother of four, told AFP as she sat in the stone courtyard of her Mayoyao home.

“But today, our children refuse to go and work in the terraces. They are lazy.”

Molanida, the World Heritage sites manager, described the “abandonment of the rice growing culture” by significant numbers of Ifugao as one of the biggest dangers for the region.

“If the younger generation are no longer interested in the rice culture and move to cities, or adopt modern lifestyles, who will be left to tend to the terraces?”

In a lengthy interview from his mountaintop office overlooking the terraces, Mayoyao vice mayor Jimmy Padchanan insisted local elders were working hard and successfully to control the march of modernity.

“We can not deny the effects of modernisation on our culture,” Padchanan said.

“But it is not all bad. We are blending old societies with the new, while maintaining many of our values.”

Padchanan said he was confident the rice terraces and ancient traditions could survive the onslaught of the 21st century.

Locals also pointed out they had a right to develop and enjoy modern society, and should not have to live in fossilised communities.

“Life before was so hard,” said Lachaona, 68, a wiry father of six and grandfather of 18.

“Education was not good. There were no roads here so we had to walk long distances to buy foods. We could not survive on just the rice we grew.”

Lachaona said his grandchildren had much better nutrition and education than his generation, while their opportunities to find work other than subsistence farming were much greater.

The expected paving in the next few years of the only road to Mayoyao will make life easier again in many ways.

Padchanan, the vice mayor, said there were plans to sell vegetables in far away towns, providing a welcome source of extra income for rice farmers.

Only a few hundred foreign tourists visit a year, and the paved road would hopefully bring a lot more.

However Molanida said he feared those sorts of developments would not be managed well.

“It is up to the Ifugao people to decide if they want to fight harder to conserve their culture and prevent chaotic development,” he said.