Neverland Ranch, known as the home of the late “King of Pop” Michael Jackson, has hit the market, according to The Wall Street Journal.

The 2,700-acre California estate where Jackson once lived — with his menagerie of animals including Bubbles the chimp (who is alive and well and dissing sister LaToya) — can be yours for the low, low price of $100 million. Located in Los Olivos, near Santa Barbara, the Peter Pan–inspired compound is the ideal home for any boy (or girl) who never wants to grow up … or has a hundred mil to spare.

Renamed Sycamore Valley Ranch, the six-bed (plus staff quarters) Normandy-style mansion measures 12,000 square feet and comes with a four-bedroom guesthouse and a two-bedroom guesthouse, not to mention a variety of other buildings on the property. The spread also contains a tennis court, basketball court, 50-seat movie theater, swimming pool plus cabana, and magic stage.

Many remnants of Jackson’s time on the ranch have disappeared, however; no longer is there a Ferris wheel and other amusement park rides. However, the WSJ does point out that there is still a llama on the property, if that happens to interest any prospective buyers.

The legendary song-and-dance man, who tragically died of a drug overdose in 2009, originally purchased the property for $19.5 million in 1987.

Despite rumors a few years ago that Lady Gaga was willing to help Jackson’s kids maintain possession of the ranch, it looks like the new owner will be someone outside the family. But that doesn’t mean just any “Billie Jean” fan can dance their way onto the property. According to the WSJ, a rep for the real estate agent says it will take a heavy vetting period to gain a showing of Neverland. 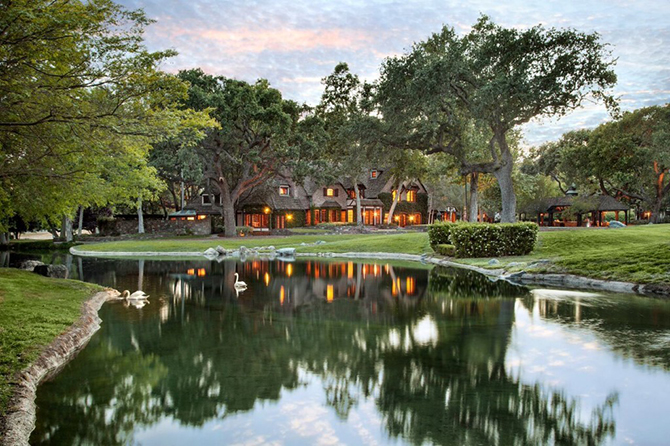 Images by Jim Bartsch. The listing agents are Suzanne Perkins and Harry Kolb of Sotheby’s and Jeffrey Hyland of Hilton Hyland.