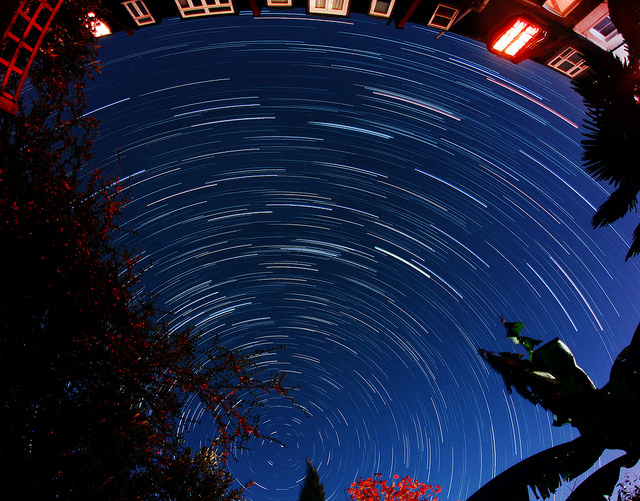 Now in its seventh year of compilation and the second year running on Universe Today, we’re proud to feature our list of astronomical happenings for the coming year. Print it, bookmark it, hang it on your fridge or observatory wall. Not only is this the yearly article that we jokingly refer to as the “blog post it takes us six months to write,” but we like to think of it as unique, a mix of the mandatory, the predictable and the bizarre. It’s not a 10 ten listicle, and not a full-fledged almanac, but something in between.

A rundown of astronomy for 2015: There’s lots of astronomical action to look forward to in the coming year. 2015 features the minimum number of eclipses that can occur, two lunars and two solars. The Moon also reaches its minimum standstill this coming year, as its orbit runs shallow relative to the celestial equator. The Moon will also occult all naked eye planets except Saturn in 2015, and will occult the bright star Aldebaran 13 times — once during every lunation in 2015. And speaking of Saturn, the rings of the distant planet are tilted an average of 24 degrees and opening to our line of sight in 2015 as they head towards their widest in 2018.

Finally, solar activity is trending downwards in 2015 after passing the sputtering 2014 maximum for solar cycle #24 as we now head towards a solar minimum around 2020.

Our best bets: Don’t miss these fine celestial spectacles coming to a sky near YOU next year:

– The two final total lunar eclipses in the ongoing tetrad, one on April 4th and September 28th.

– The only total solar eclipse of 2015 on March 20th, crossing the high Arctic.

– A fine dusk pairing of the bright planets Jupiter and Venus on July 1st.

– Possible wildcard outbursts from the Alpha Monocerotid and Taurid meteors, and a favorable New Moon near the peak of the August Perseids.

– The occultation of a naked eye star for Miami by an asteroid on September 3rd.

– A series of fine occultations by the Moon of bright star Aldebaran worldwide.

The rules: The comprehensive list that follows has been lovingly distilled down to the top 101 astronomical events for 2015 worldwide. Some, such as lunar eclipses, are visible to a wide swath of humanity, while others, such as many of the asteroid occultations or the sole total solar eclipse of 2015 happen over remote locales. We whittled the list down to a “Top 101” using the following criterion:

Meteor showers: Must have a predicted ZHR  greater than 10.

Conjunctions: Must be closer than one degree.

Asteroid occultations: Must have a probability ranking better than 90 and occult a star brighter than magnitude +8.

Comets: Must reach a predicted brightness greater than magnitude +10. But remember: comets don’t always read prognostications such as this, and may over or under perform at whim… and the next big one could come by at any time!

Times quoted are geocentric unless otherwise noted, and are quoted in Universal Time in a 24- hour clock format.

These events are meant to merely whet the appetite. Expect ‘em to be expounded on fully by Universe Today as they approach. We linked to the events listed where possible, and provided a handy list of resources that we routinely consult at the end of the article.

Got it? Good… then without further fanfare, here’s the top 101 astronomical events for 2015 in chronological order: 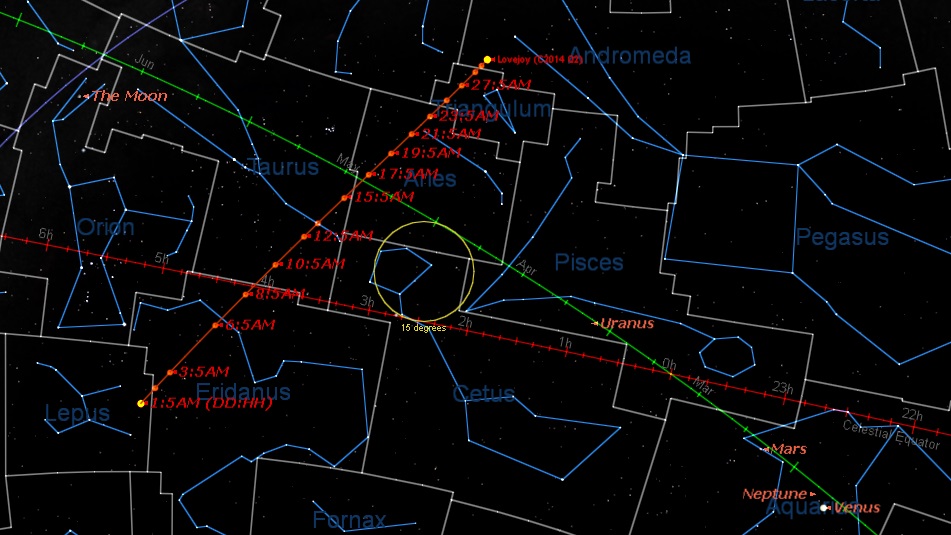 04- The Quadrantid meteors peak at 02:00 UT, favoring northern Europe with an expected ZHR of 120. 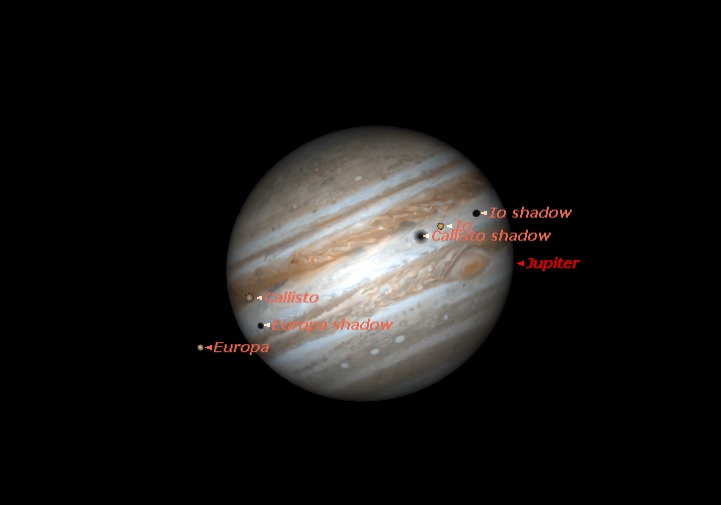 The view at 6:40 UT on January 24th, as 3 of Jupiter’s moons cast shadows on to the Jovian cloud tops simultaneously. Created using Starry Night Education software.

05- Earth crosses through Jupiter’s equatorial plane, marking the middle of occultation and eclipse season for the Galilean moons.

18- A “Black Moon” occurs, in the sense of the third New Moon in a season with four.

The path of the only total solar eclipse of 2015, occurring on March 20th. Credit: Michael Zeiler/Eclipse-Maps.

20- A total solar eclipse occurs over the Arctic centered on 9:47 UT.

25- The Moon occults Aldebaran for northwestern North America at ~7:17 UT. 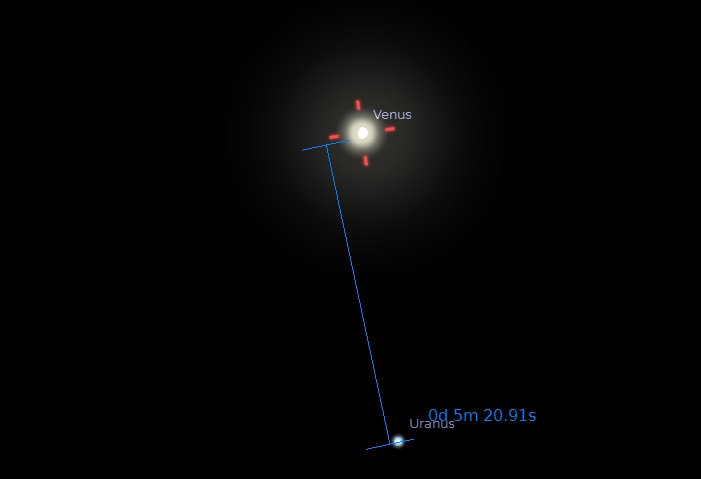 04- A total lunar eclipse occurs, centered on 12:01 UT and visible from eastern Asia, the Pacific and the Americas.

05- The Eta Aquarid meteors peak (time variable), with an estimated ZHR of 55.

07- Mercury reaches greatest evening elongation at 21.2 degrees east of the Sun at 4:00 UT.

19- The Moon occults Aldebaran for northern North America at ~2:53 UT .

Venus and Jupiter pair together low in the west on July 1st. Credit: Stellarium.

06- Pluto reaches opposition at 15:00 UT, just a week prior to New Horizons’ historic flyby of the distant world.

28- The Delta Aquarids peak (time variable) with a predicted ZHR of 16.

31- A “Blue Moon” occurs, in the sense of the second Full Moon in a given month. 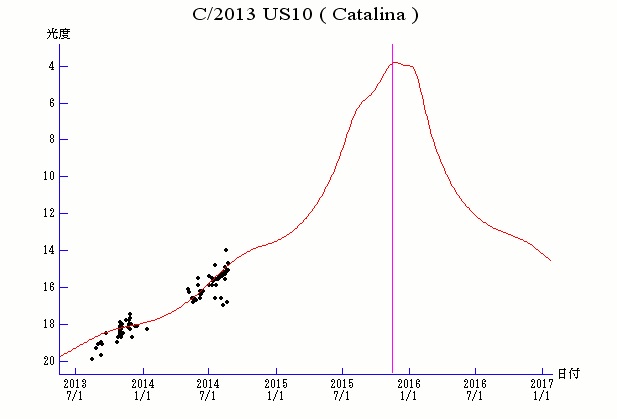 The light curve of comet C/2013 US10 Catalina through its peak in 2015. Credit: Seiichi Yoshida’s Weekly Information About Bright Comets.

07- Mercury, Jupiter and Regulus pass within a degree of each other over the next few mornings. 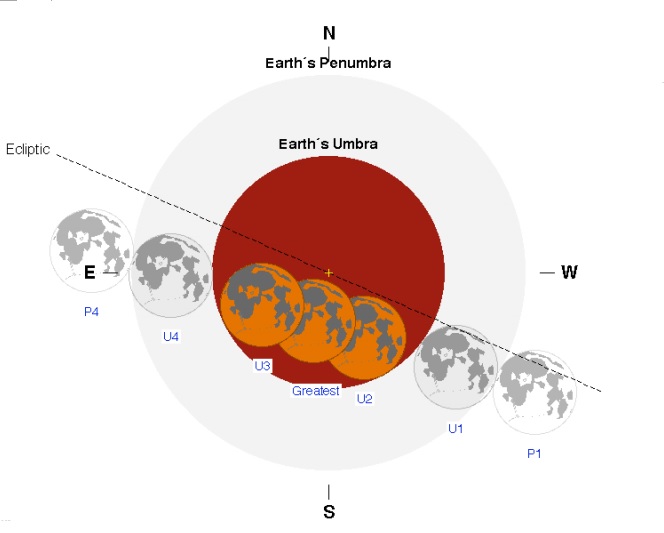 The path of the Moon through the Earth’s shadow on September 28th. Credit: Fred Espenak/NASA/GSFC

03- Asteroid 112 Iphigenia occults a +3rd magnitude star for Mexico and Miami at ~9:20 UT. This is the brightest star occulted by an asteroid in 2015.

02- Geostationary satellite and SDO eclipse season begins as we approach the September equinox.

05- The Moon occults Aldebaran for northeastern North America at ~5:38 UT.

13- “Shallow point” (also known as the minor lunar standstill) occurs over the next lunation, as the Moon’s orbit reaches a shallow minimum of 18.1 degrees inclination with respect to the celestial equator… the path of the Moon now begins to widen towards 2025.

28- A total lunar eclipse occurs centered on 2:48 UT, visible from the Pacific, the Americas and eastern Europe.

The path of the September 3rd occultation of a +3rd magnitude star by an asteroid over central Mexico and the Florida Keys. Credit: IOTA/Steve Preston.

02- The Moon occults Aldebaran for the northern Pacific at 13:14 UT.

21- The Orionid meteors peak (time variable) with a projected ZHR of 15. 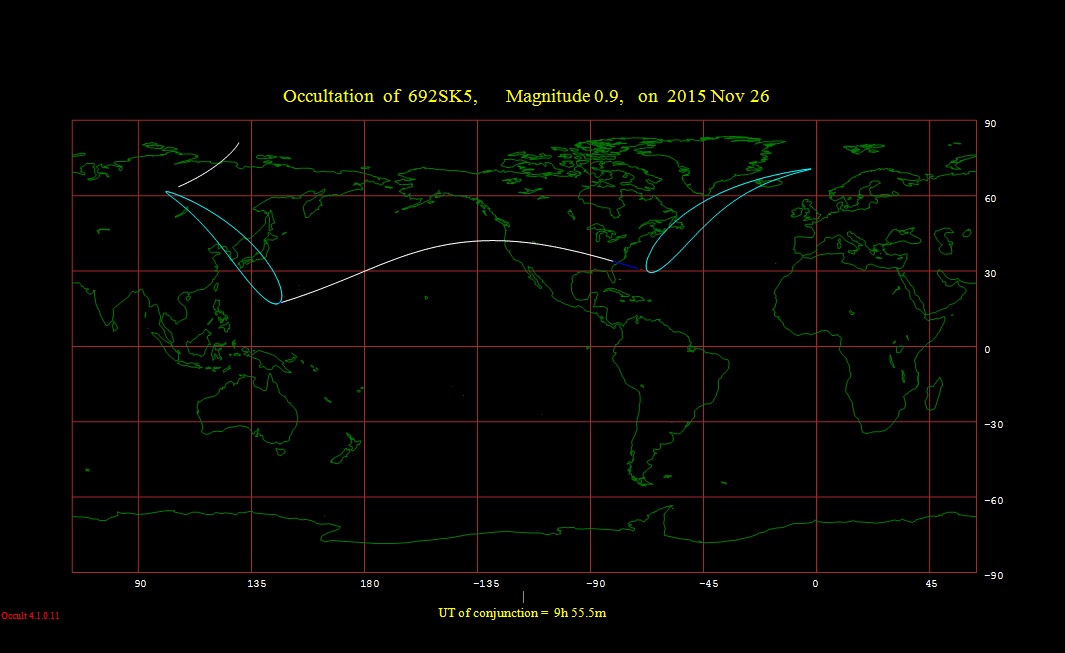 The Moon occults Aldebaran: the visibility footprint for North America. The dashed line denotes the area in which the event occurs during the daytime. Credit: Occult 4.1.0.11. 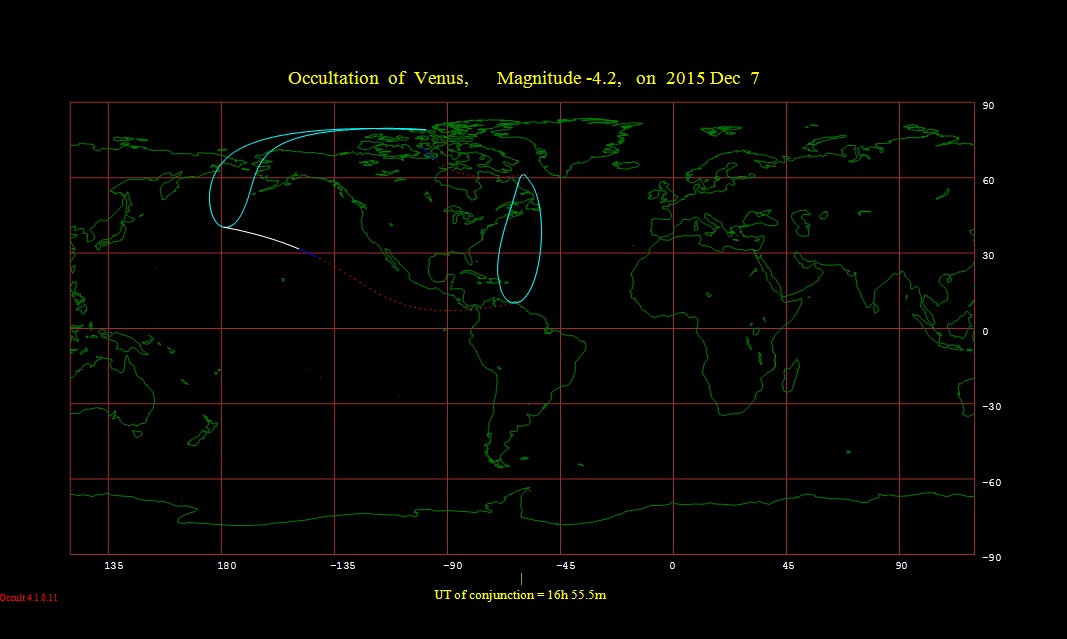 The daytime occultation of Venus by the Moon over North America on December 7th. Credit: Occult 4.1.0.11.

04- Mercury occults the +3.3 magnitude star Theta Ophiuchi for South Africa at 16:16 UT prior to dusk.

23- The Ursid meteor shower peaks at 2:30 UT with a ZHR variable from 10-50 favoring Europe and the Middle East.

Didn’t see your favorite event on the list? Let us know, and be sure to send in any images of these fine events to Universe Today’s Flickr forum.

Enjoy another exciting year of space and astronomy… we’ll be expounding on these events and more as 2015 unfolds.

-Greatest Elongations of Mercury and Venus.

-The USNO forecast of phenomena for 2015.