Interesting and unusual things to do for a fiver or less this week. For more ideas have a look at our Free Cheap page. 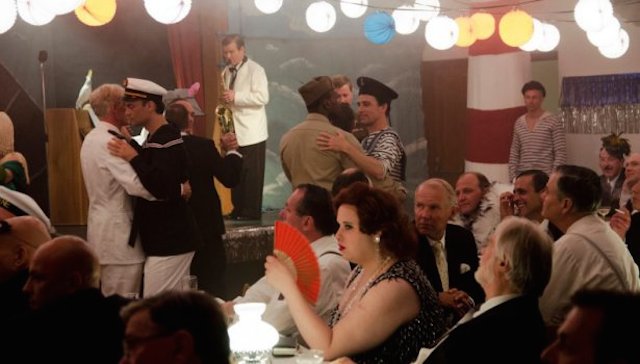 ART EXHIBITIONS: Feeling arty this month? There’s plenty to choose from in London. Take a look at our November art listing: this month includes fashion, sleep, art and sex. Most of the exhibitions listed are free.

BONFIRE NIGHT: It’s Bonfire Night week! London celebrates Guy Fawkes with plenty of fireworks displays across the city: find the closest one to you. Many of them are free as well.

FILM FESTIVAL: The Imperial War Museum‘s Short Films Festival focuses on films inspired by the museum’s collection, exploring the Second World War, but also with a focus on more modern conflicts in Vietnam, Syria and Afghanistan, and Ukraine. All film screenings are free, browse website for full programme. Until 10 November

QUEER FESTIVAL: Fringe! Queer Art Film Fest kicks off on Monday. A series of film screenings, performances and talks focus on the LGBT world. Check out the events schedule, most of them are free or under £5. Until 9 November

LAST CHANCE: See David Monteleone exhibition at Saatchi Gallery before it closes today. The award winning photographer explores the Chechen identity with a series of photographs taken during his trips to the country. Free entry

LERNER’S LIFE: Dominic McHugh, author of Alan Jay Lerner: A Lyricist’s Letters, is in conversation with Lerner’s widow, Liz Robertson at Samuel French Bookshop in Fitzrovia. They discuss the life and legacy of the musical theatre legend behind My Fair Lady, Camelot and Gigi, who worked with the likes of Julie Andrews and Andrew Lloyd Webber. Includes a QA and book signing. Free, just turn up, 6.30pm

HISTORICAL TALK: Wiener Library in Russell Square hosts a talk about the recently re-emerged correspondence between Margaret and Heinrich Himmler during the Holocaust. The talk is held by historian and academic Professor Michael Wildt, who has been working closely with the material. Free, prebook, 6.30pm

COMEDY: The Spectacular Spectrum of Now comedy show is on tonight at The Star of Kings in Kings Cross. Line-up includes Al Lubel, Mr Susie, The Grandees and many more. £5/£3, just turn up, 7.30pm

UNKNOWN SOLDIER: A new exhibition opens at the Poetry Library at Southbank Centre today. An Unknown Soldier is a series of printed poems responding to remembrance, DNA technology and propaganda. The exhibition also includes new works for the centenary year of the outbreak of the war, commissioned to highlight the 43 million pocket Gospels of St John that were given to servicemen. Free, just turn up, until 4 January

WIENER LIBRARY: As part of the autumn My Story talk series, Wiener Library welcomes Elfriede Starer who talks about her experience of deportation during the Holocaust. The talk is followed by an optional free tour of the Library’s exhibition and basement archives. Free, prebook, 11.30am

MUSEUM LATE: Sir John Soane’s Museum opens its doors after the normal opening times and gets lit by candlelight. This event is always very popular, so we suggest you get there early to avoid disappointment. Free, just turn up, from 5.30pm

PUB QUIZ: The Charles Holden pub in Colliers Wood hosts a Game of Thrones pub quiz. Teams can have up to six players and you need to email bookings@geeksinc.co.uk to book your space. £2pp, prebook, 7.30pm

POETRY: Burn After Reading is hosted by a community of emerging young poets and each month showcases the foremost voices of poetry and spoken word. This month features Yomi ‘GREEdS’ Sode and Katie Bonna alongside the Burn After Reading Poets, held in Seven Dials Club, Covent Garden. £5, just turn up, 7.45pm

BONFIRE NIGHT: It’s Bonfire Night week! Find the closest whizzbangs to you. Many displays are free.

FREE WALK: Today and tomorrow, GoToMidtown Walks runs a free walk to mark the anniversary of Kristallnacht (the Night of Broken Glass). You will be taken to the Wiener Library, one of the world’s leading and most extensive archives on the Holocaust and Nazi era. Free, prebook by email at walks@inmidtown.org, 1pm both days

MUSIC AND POETRY: Violinist and musician Aisha Orazbayeva curates a night of music and poetry from Kazakhstan as part of Dash Arts Central Asian Season. The event takes place at Rich Mix in Shoreditch. Free, just turn up, 7pm

ANTHOLOGY LAUNCH: Black BLUE present the launch of their new anthology, Revolution, at The Red Lion in Hoxton. The event is also a book swap; bring along a book you’ve enjoyed and a piece of writing about why you enjoyed the book, and try to convince a stranger to swap with you. £5 in advance which includes a copy of Revolution, or £2 entry on the door, 7pm

CINEMA NIGHT: Whirlygig Cinema presents an evening of short films at the Hackney Attic every month. This time the focus is on screenwriting, featuring Zak Klein, Dee Meaden and Paul Murphy. £5/£4, prebook, 7.30pm

PIZZA LOVE: Can a pizza box be considered a piece of art? Find out at The Art of Pizza Box exhibition, taking place at The Old Truman Brewery in Brick Lane. On display is the collection of Guinness World Record holder Scott Wiener. Free, until 9 November

SAMPLE SALE: After you’ve looked at pizza boxes, head to The Concrete Studio Sample Sale also at The Old Truman Brewery, but in The Dray Walk Gallery. Expect exclusive pieces at heavily discounted prices from past and present collections. Free entry, until 9 November

SIKH HISTORY: Filmmaker and writer Jay Singh-Sohal is at Kingsbury Library Plus to talk about British Sikh history. In a film and visual presentation, he shares his research and latest film on the often overlooked contribution made by more than a million Indians during the First World War. Free, just turn up, 2pm

GALLERY LATE: William Morris Gallery in Walthamstow opens its doors after the usual opening times for a gallery late. Inspired by its current exhibition, Rossetti’s Obsession, the event celebrates the intense relationship between artists and their muses with selected art, music, poetry, food and drink. Free, just turn up, from 6.30pm

WALK IN THE PARK: Find out more about the role of Hyde Park during World War I and World War II with a guided walk led by Isis Education Centre. The walk is for children over eight years old who must be accompanied by an adult. £5, prebook, noon

GIG: The Good Ship in Kilburn presents a night of indie and retro rock, featuring The Episodes, Winters Island, The Diamond Age and Frobisher. £4, prebook, 7.30pm

LET’S SWING: Listen to The Broken Swing Band , performing tonight at Charlie Wright’s Music Bar in Hoxton. Music and dance cost £5 and for £3 more you can also take a swing dance class, taught by the London Swing Dance Society. £5, prebook, from 7.30pm

DISCO PARTY: Head to the Platform Bar in London Fields for YesNoDisco DJ battle night. Entrance to the party is free. Just turn up, from 9pm

LEST WE FORGET: The RAF Museum in Colindale has a weekend of remembrance themed activities for families. Write a personal message on a hand made poppy and stick it to the wall of remembrance, or take part in a museum trail. Free, just turn up, 8-9 November

OPEN DAY: Ilford Hospital Chapel, the oldest building in the borough of Redbridge, opens its doors to the public today. There will be also guided tours available during the day. Free, just turn up, 10am-2.30pm

LORD MAYOR’S SHOW: The Lord Mayor’s Show is almost 800 years old. Don’t miss it today: the procession will start at 11am from Mansion House and ends with a fireworks display along the river at 5.15pm. See website for more information about the programme. Free, from 11am

WALWORTH AT WAR: Cool Tan Arts runs a free public walk to reflect on the stories and experiences that war has had on the citizens of Walworth and nearby. Starts at Newington Temporary Library and finishes at the Imperial War Museum. Free, just turn up, 12.30pm-3.30pm

BRIXTON MARKET: To walk around Brixton Market while learning more about its history, join the guided walk organised by the Brixton Society. Meeting point is at Brixton station, to book your place email marketwalks@brixtonsociety.org.uk. £3, prebook, 2.30pm

POETRY AFTERNOON: Some of the finest poetry ever produced came from the devastation and bravery witnessed during the First World War. This afternoon’s readings by the Keats House Poetry Ambassadors will focus on the unique perspective of women writers. Free, just turn up, 3-4pm

GOOD CAUSE: Join Citrus Saturday for their official launch in Camden Market today. This social enterprise lemonade business is run by UCL students and aims to raise money for distributing its educational programme around the world. Every (cheap) bottle of lemonade you get is for a good cause. 10am-5pm

PHOTOGRAPHY FAIR: The London Photograph Fair is at Holiday Inn in Bloomsbury, offering the public a chance to buy photographs and prints from the 19th-21st centuries. The extensive list of exhibitors includes Roland Belgrave Vintage Photography, Pump Park Photographs and more. £5, prebook, 11am-4pm

Check out our map of free things to do in London for more frugal fun. Or pop over to BrokeInLondon.com who also have plenty of great ideas.