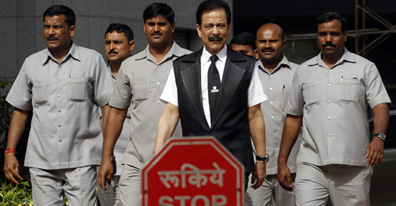 Mumbai: Shares of two listed entities of Sahara Group – Sahara One Media Entertainment and Sahara Housingfina Corporation – on Friday ended in the negative territory after its chief Subrata Roy was arrested in Lucknow.

Sahara One Media Entertainment’s scrip fell 2.99 percent to settle at the day’s lowest level Rs 60.10 on the BSE.

Sahara Chief Subrata Roy was arrested in Lucknow today after he evaded for two days a non-bailable warrant issued by the Supreme Court for his failure to appear before it in a case of non-refund of Rs 20,000 crore to investors.

Subrata Roy issued a signed two-page statement, claiming he was not absconding and was ready to “unconditionally follow” the Supreme Court’s direction.

Minutes after his arrest in Lucknow, son Seemanto addressed a hurriedly called press conference in New Delhi and said his father was cooperating with the authorities and he had wilfully submitted before the police.

Seemanto also said that arrest would not impact the business of the group, which claims to have a networth of over Rs 68,000 crore with lakhs of employees.

In a statement, Roy claimed there was no direction against him by the Supreme Court in its orders dated August 31, 2012 and December 5, 2012, (with regard to depositing over Rs 24,000 crore with Sebi for refund to bondholders of two Sahara firms) and still he was “facing all this”.