A listing for Dragon Age III: Inquisition has appeared on Amazon Italy and suggests that the title is headed to Xbox One. The listing contains no pricing info and lists a placeholder date of January 1, 2020. 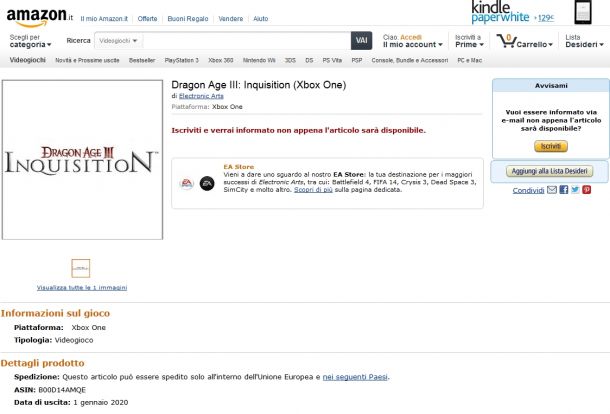 Dragon Age III was announced in September and specifically mentioned the Frostbite 2 engine, leading many to assume it was a current-gen game. Later, an employee resume suggested it had shifted to next-gen, but that’s never been officially confirmed by EA.

Earlier this week, Amazon Italy also listed Mirror’s Edge 2, suggesting it could have insight into some of EA’s upcoming announcements.

We’ve reached out to EA for comment on the listing. Expect more information on Dragon Age III at EA’s E3 2013 press conference on Monday, June 10th at 1:00 p.m. Pacific.

Andrew Goldfarb is IGN’s news editor. Keep up with pictures of the latest food he’s been eating by following @garfep on Twitter or garfep on IGN.